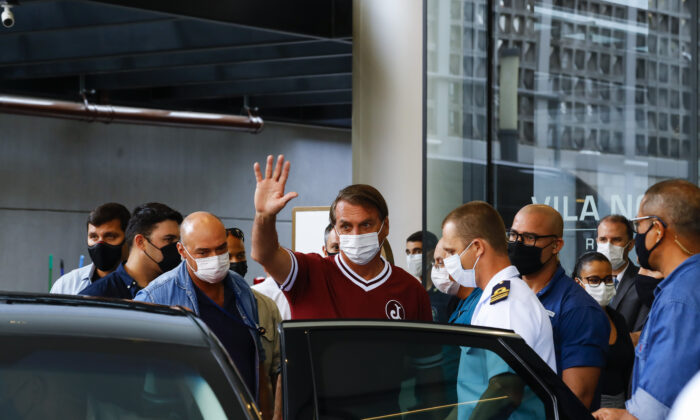 SAO PAULO—Brazil’s President Jair Bolsonaro was discharged from a hospital on Wednesday morning in Sao Paulo, and addressed the press.

He had been hospitalized for two days after an intestinal obstruction, which forced him to cut short his vacation. On Tuesday, the medical team accompanying him had ruled out the need for surgery.

Bolsonaro, 66, has undergone four surgeries stemming from the abdominal stabbing he suffered during a 2018 campaign event.

At the time, he was operated on by Dr. Antonio Luiz Macedo, the same doctor who has been attending to him since then.

“We instruct patients to chew well, avoid some foods, and we hope to keep the president like that for the next 20, 30 years,” Macedo told reporters in the hospital’s lobby before Bolsonaro’s departure to the airport. He also recommended the president avoid intensive physical activity this week.

Bolsonaro joked about the difficulty of the restrictions.

“I’ll try to follow them, but life goes on,” he said. “My whole life I was an athlete, in the armed forces, a paratrooper, diver. It’s hard to stay still.”