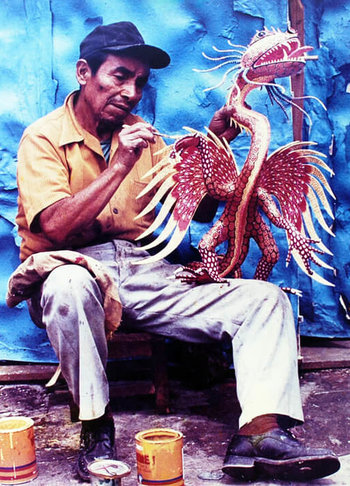 From Wikipedia, the free encyclopedia
Edited and Revised by LiesHunter.Com – LinCu Information Services

Pedro Linares López (June 29, 1906 – January 25, 1992) was a Mexican art designer born in Mexico City and was the creator of the papier-mâché figurines named alebrijes.

Pedro Linares started as a maker of carton Judas figures and figurines for Diego Rivera, Frida Kahlo and many other artists from the Academia San Carlos. The art form of alebrijes was created by Pedro Linares after he became ill at 30 years old. His own alebrijes originated from a dream, depicting his death and rebirth in a mountainous setting inhabited by these fierce creatures.

After his illness subsided, Linares gave life to his vision and the art of making alebrijes was born. He wanted his family and everyone to know about the animals he saw by taking a piece of paper and molding the figurines from his memory, then painting them as he saw them in his dream.

Work done by Linares for Diego Rivera is now displayed at the Anahuacalli Museum in Mexico City. In 1990, Lopez was awarded the National Prize for Arts and Sciences (Premio Nacional de Ciencias y Artes) in Popular Arts and Traditions category, the highest decoration to artisans granted by the Mexican Government.